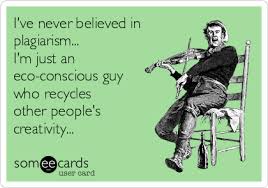 We’ve all been there…

So, this happened to me this week. I accidentally stole one of Sarah McLachlan’s lyrics, used the same number of repeats in my chorus, and even did a similar melodic inflection on the second repeat. Either I had heard the song before and subconsciously “recycled” the lyric, or I hadn’t heard it before, and it was just a coincidence, as it is a common phrase, and a common melodic change to use. Either way, I was pissed off, and swore a lot when someone pointed this out and sung Sarah’s song to me. I do swear a lot generally. But in this case, I really went the extra mile.

The whole reason I started songwriting, when I was a kid, is because it occurred to me that there are only so many scales in Western music, only so many notes within them, only so many time signatures and rhythmical combinations to use… I was an oddly jaded 13 year old, and I was sort of convinced that all of the songs that had been written had used up all of these possibilities already ~ (thankfully, I’m absolutely fucking terrible at maths, so I didn’t think about the odds…) Anyway, that’s what musically started me off. I wanted to prove my-world-weary-self wrong. Turns out, when you’re that absolutely shamefully shite at examining statistics, proving oneself wrong is really easy to do. Hence why I’m still writing songs, and not basking in the glory of a mathematical doctorate from somewhere expensive.

I mean it’s not like I haven’t stolen melodies like the craven thieving harpy that I am… I unintentionally steal melodies all the TIME! I just usually realise in time to change a vital note or two ~ thus generally improving the song and actually making my sound a bit more interesting. Some could argue that a bit of self-aware pilfering could improve one’s melodic game entirely, but you didn’t hear it from me, okay? Great. Ta.

But words. Words are different. If you change a word, you change a meaning, a concept even, change to the wrong syllable and you change someone’s perception, or you snuff out a perception that someone will have that would have never occurred to you. I do love that about certain songs. To one person they could be about a tragically broken heart, and to another, about how to fall in love, with integrity ~then in the next year to the same person~ a way of looking out for one’s own mental health. Songs can be so wonderfully open and abstract, whilst holding the listener emotionally, even if said listener don’t have a clue as to which concept was originally the main focus from the writer’s perspective. I try and write like that. I try and write as openly as I can, and in that way I suspect it’s a bit like abstract paintings, in that you can project whatever world you inhabit onto it, and it still seems entirely congruent and emotionally real. I can put so much of myself in the work like that, because every time I sing them, the songs mean something subtly new and still relevant to my life. It doesn’t matter how many times I sing them live. To me, then the work is doing its job, and is alive, for me as much as it is for any audience. The music itself holds the emotions, and the lyrics can go where they will. That’s why I’m not a poet, I guess. Music holds your heart, while your mind can wander around nuances of meaning from the lyrics, in a more leisurely way than in poetry, and actually, somehow the meaning can be either secondary to, or can utterly inspire, the emotional reaction in the process. I often wish poets would savour their phrases like singers do. It’s too fast, usually, for me to squeeze all the meanings out of the words in a satisfactorily thorough way. I am a woman, therefore I’m utterly skilled in the art of “how to unnecessarily over-analyse,” which means my brain gets snagged on certain phrases and generally can lose the plot if I don’t make it behave. Woman-brain should really be a recognised medical affliction. Especially if the woman in question, like me, happens to be a lesbian. Then, if you’re lucky enough to have a lady, you have to deal with double-woman-brain on a daily basis, and then you’re totally fucked! (But you’ll probably like my music, so there is a consolation prize!) Of course, that is a good skill to have if you like getting creative with words ~ or as some might say, becoming a cunning linguist. (Badaboom-tssssssch! ~That was an old favourite lesbian-joke, by way of explanation for those who have never heard of cunnilingus. Wow… How did I start talking about this? What’s going on?! Oh. Songwriting. Right. *Flustered.*)

So yes, with my lyrical choice dilemma of this week, I did change one of the words. I was experimenting with just putting entirely different lines in, but that didn’t seem to fit what I had to say. What happened eventually was that I said the same line, then left out a word in the second repeat and changed the melody completely from the original similar variation I started with. In the third repeat of the line it is completely different anyway but I still changed it to keep myself happy and plagiarism-free until the next time my subconscious mind chooses to be a bit of a cock lord.

I think ultimately every songwriter will have had a similar experience of their own at some stage in their lives. Sometimes you can’t tell if you’ve come up with a timeless archetype, or if you’ve accidentally ripped off Frank Sinatra’s more obscure work that you heard in the background of a musical that was on TV when you were 6 and thinking really hard about whether or not you could fly if you jumped off the arm of the sofa. Either way, unless you are likely to be facing a lawsuit any time soon, I wouldn’t worry. Your friends will probably do that thing of haltingly, wincingly breaking it to you, and then you are within your god given rights to swear like a young Glaswegian woman whose eyelid has just been stung by a wasp.

Your subconscious only did that to you so you can write better songs anyway. So I’ll close this post by saying:

“Dear Subconscious and brain in general,

I’ve finished some of my swearing now, and I understand that you’re coming up with your best stuff, even if most of it is probably a bit similar to that-thing-I-can’t-quite-put-my-finger-on, but you do a great job when you’re not shamelessly filching other people’s ideas, and that’s what really counts. Thanks for not always being unoriginal. And when you are, thanks for giving me other people’s ideas to adapt the ideas I’ve just realised are other-other people’s ideas with.” (If you can interpret any meaning from that last sentence, you’re doing better than the majority of my brain.) “And thank you for when you are original. And thank you for being funnier than when I used to try to put jokes in my essays at school. And I just wanted to say you are very well versed in adding all kinds of meaning into my life, so thank you for that. And also, why do you keep mentioning those things you always mention? RSVP.